How to Throw a Parisian-Inspired Madeline Party 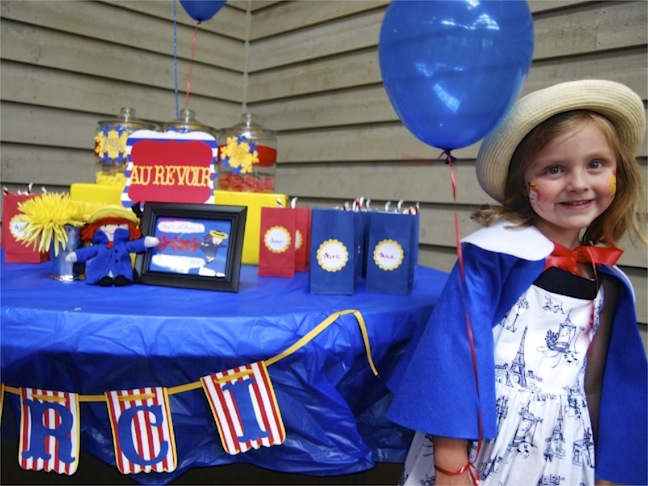 My children have a few favorite books they love to read over and over again. The exclusive list includes Elmer, Corduroy, Bear Snores On (and all the Bear books by Karma Wilson), Pete the Cat, and the classic Madeline. The Parisian schoolgirl who wore the blue cape and signature hat captured our minds and hearts in the timeless Madeline children’s books. Well, this Madeline party captured my party-throwing spirit!

In a room covered with red, yellow, and blue,
Partied fifteen girls who painted and ate candy, too.
Everyone wore a hat and blue cape,
Then ate a Madeline birthday cake! 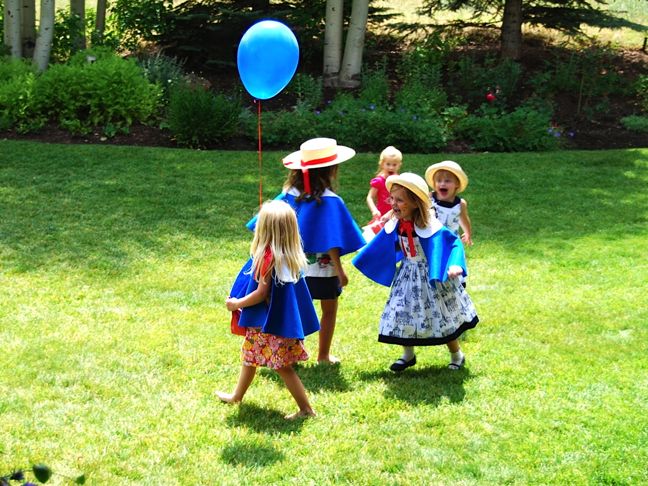 My good friend Atlanta shares how you we host our own memorable Madeline party.

Set up an art station: A mini Louvre is definitely in order for a Parisian-themed party. Set up mini easels and canvases, along with paint and paintbrushes, and let their inner Picassos come out. 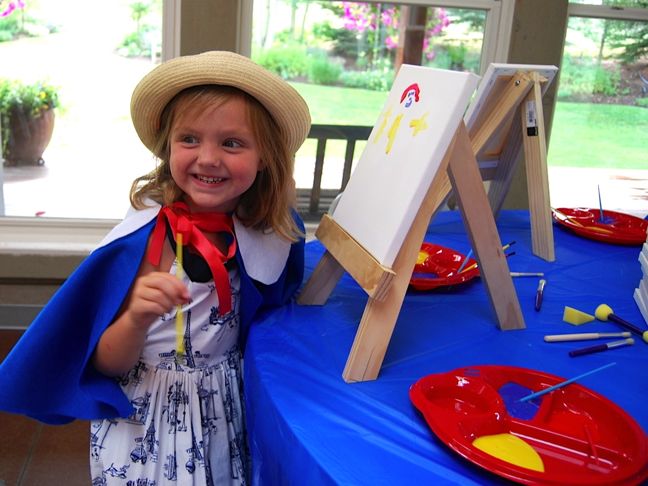 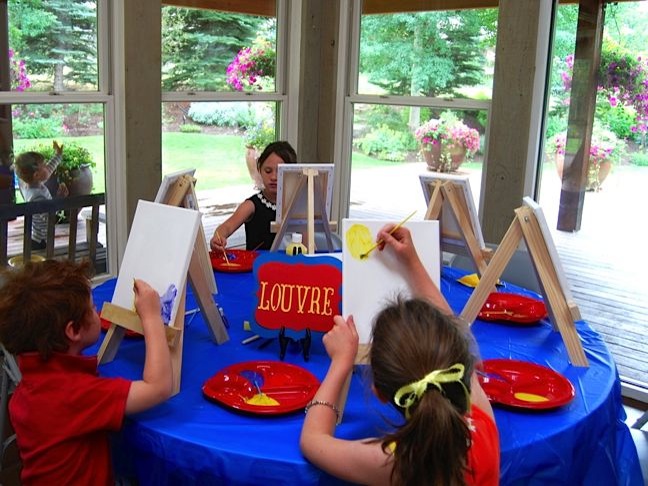 Set up a shoppe: Madeline was a Catholic schoolgirl who always wore a blue cape, a yellow hat with a black hatband, white socks, and Mary Jane shoes. One of the hits of the party was the Madeline shoppe I set up for all the girls, so they could play the part of Madeline. 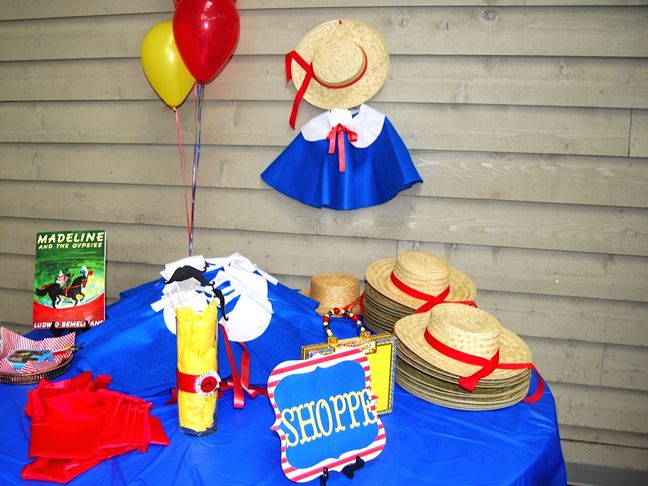 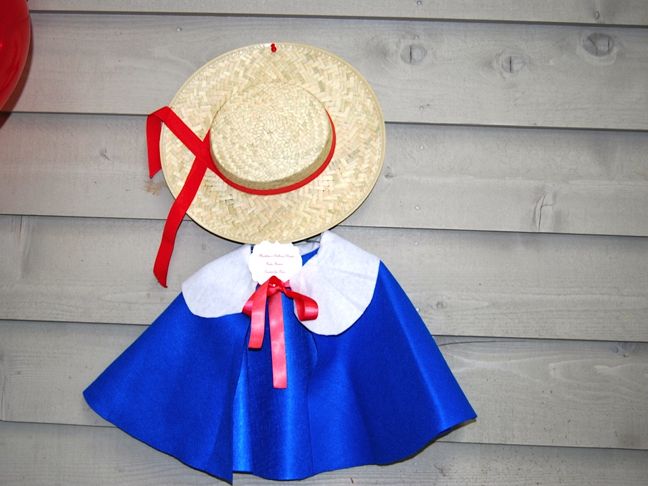 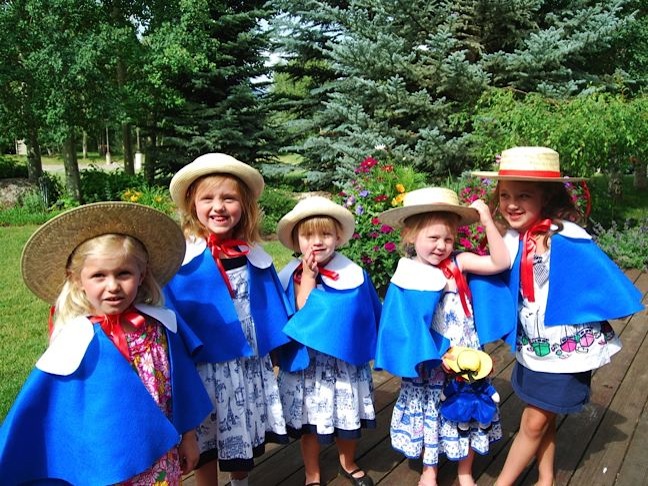 Play give the dog a bone: A friendly dog rescues Madeline in the book Madeline’s Rescue, and the dog became known as her dog. In the book it reads,The dog loved biscuits, milk, and beef. And they named it Genevieve. I had a real Genevieve make an appearance, and played a “give the dog a bone” game for some extra laughs. 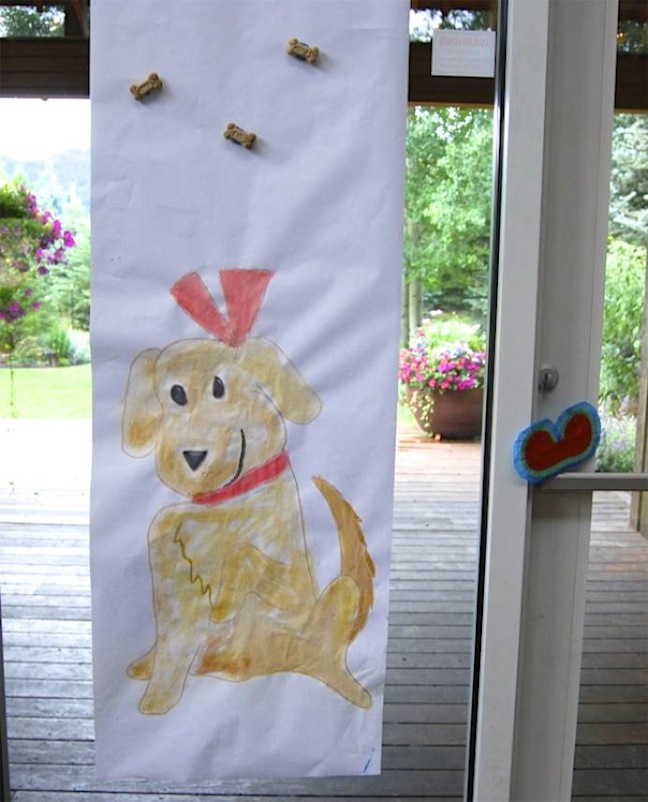 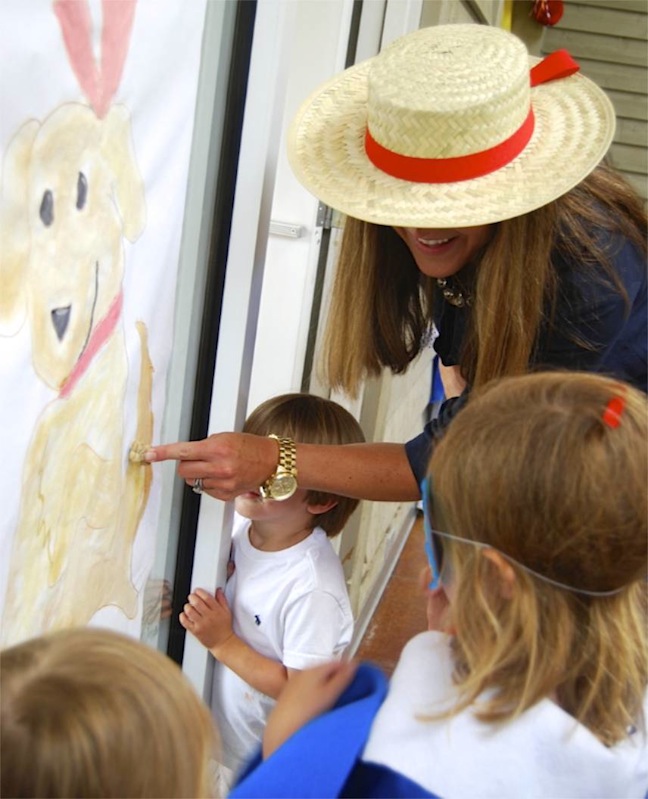 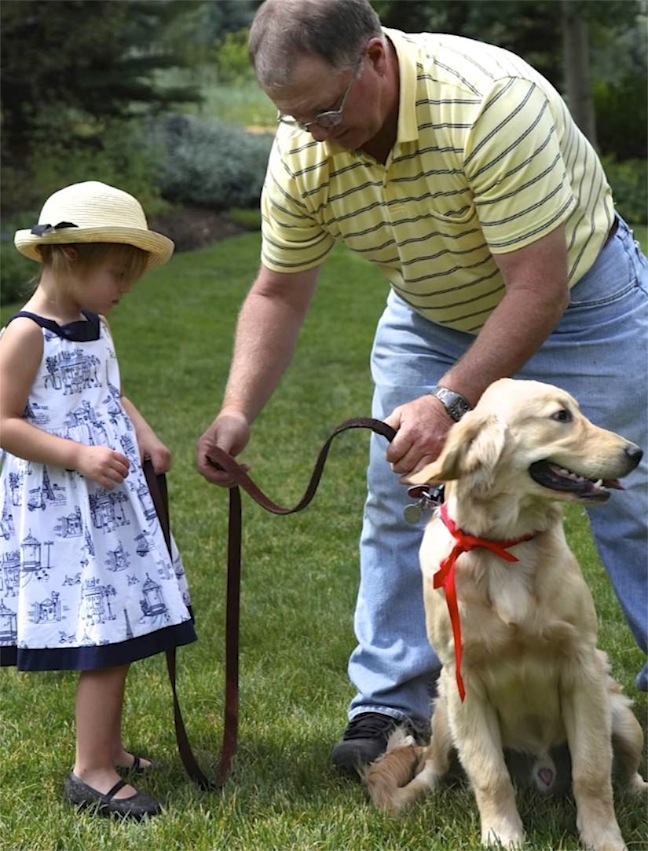 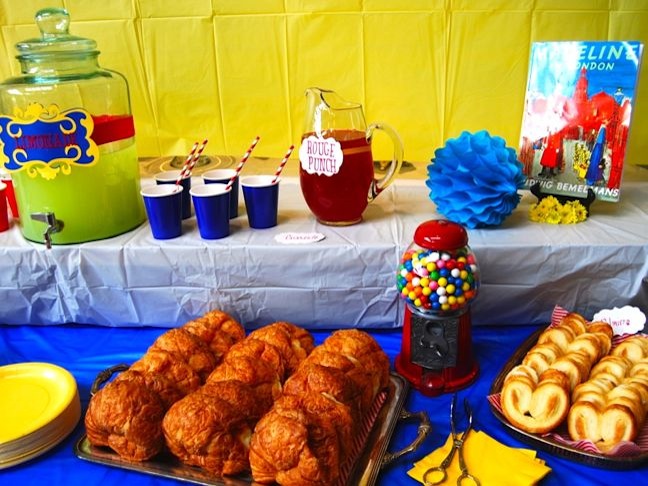 Say “au revoir” and “merci” with something sweet: Kids love sweets, so I set up a candy buffet with red, yellow, and blue candy for kids to take home in their own goody bags. We blew out candles on a custom-made cake for the special birthday girls, topped with a fondant Madeline and dog, Genevieve. 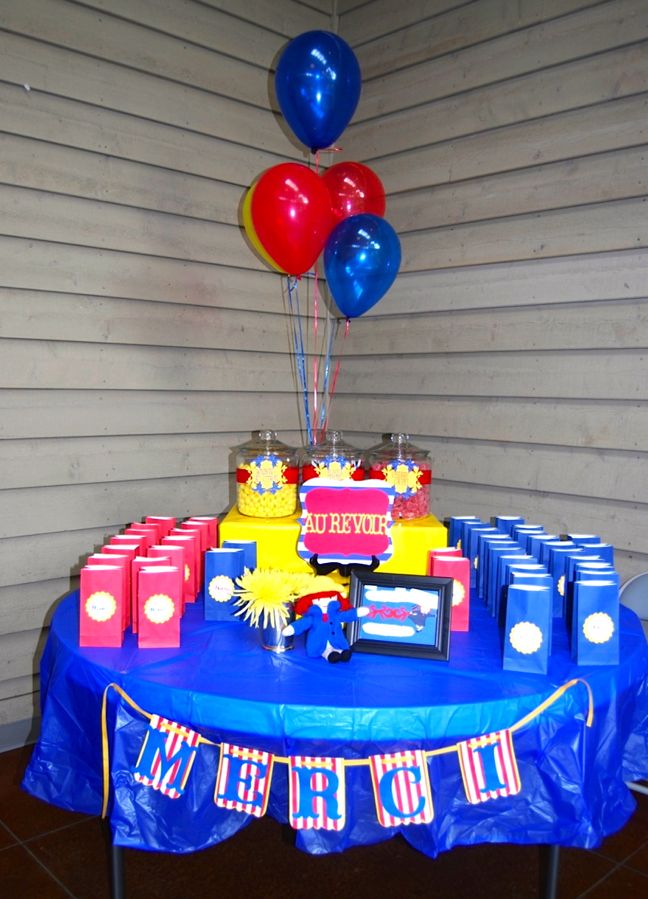 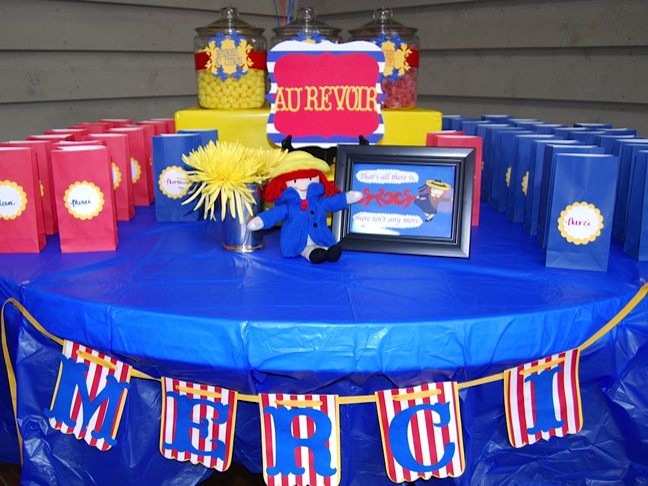 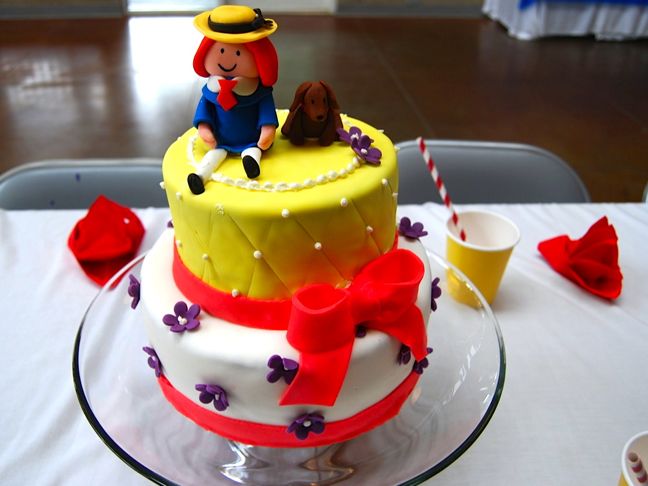 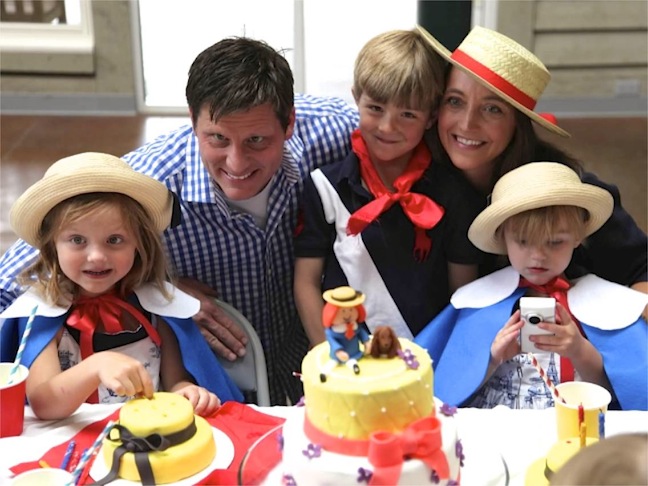 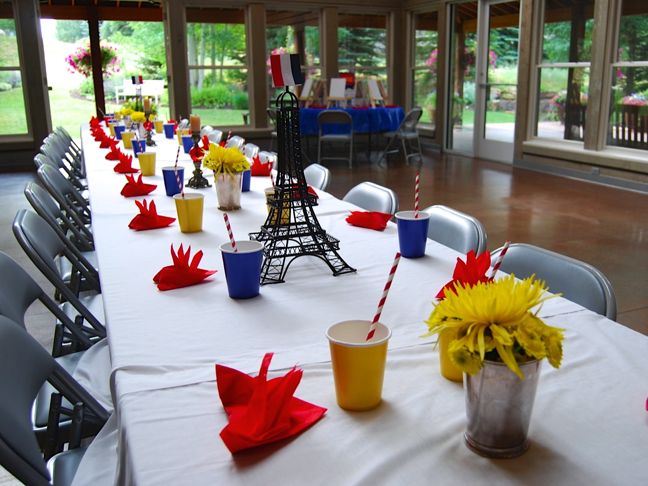 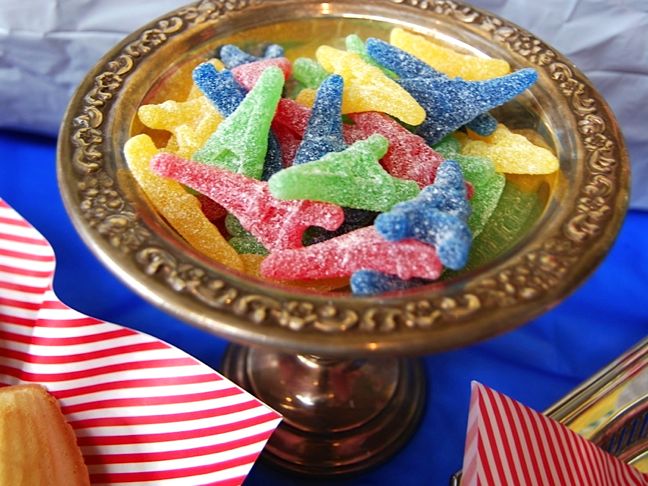 Add some Parisian flair: Make French signs, such as merci (thank you), au revoir (goodbye), and bienvenue (welcome). And don’t forget about the Parisian mustache for the little men at the party. You will not need a professional face painting artist for this—an aunt, uncle, or friend will do just fine. 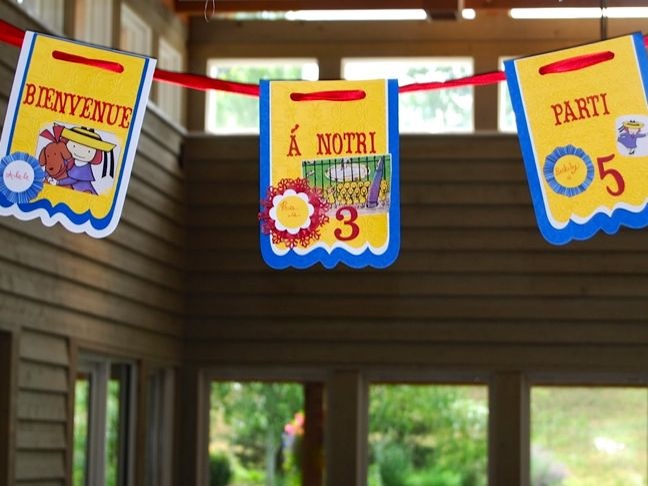 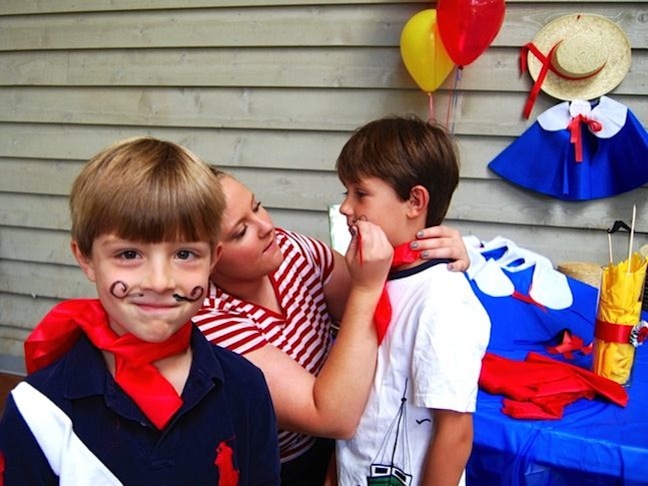 Add little details from the book: A signature detail from the Madeline books is her red suitcase. I used a red suitcase for an entry prop, along with a doll Madeline, the invitation, balloons, and a stuffed animal dog. I incorporated red, yellow, and blue colors throughout the party for pops of color, and because those colors were meaningful in the book—red (Madeline’s ribbon), yellow (Madeline’s hat), and blue (Madeline’s cape). There’s nothing cuter than children’s artwork, so I proudly displayed my daughter’s Madeline artwork for everyone to see. 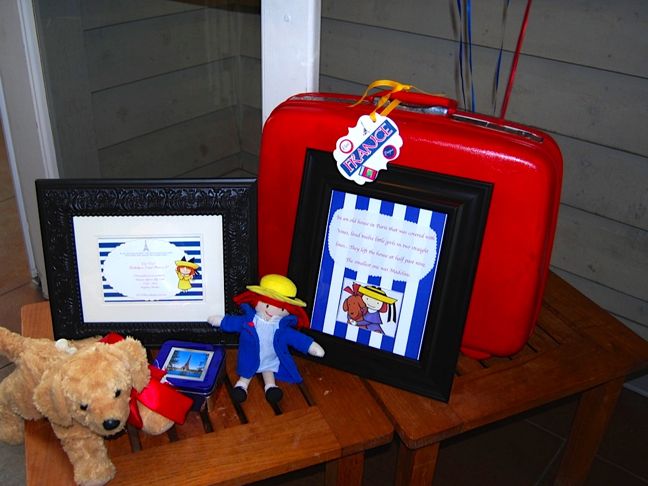 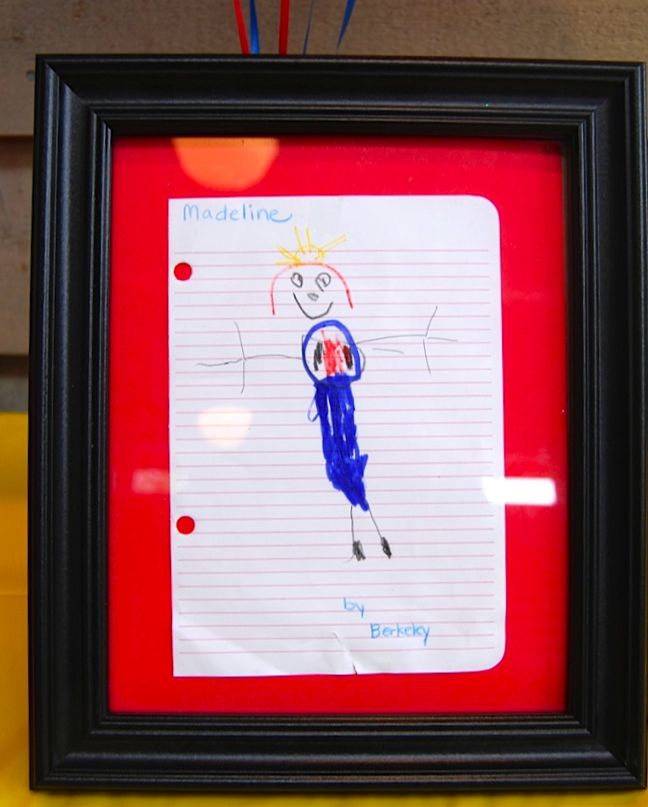 Jessica Gregg is the oldest of the three sisters who founded j. sorelle, a lifestyle + events blog. With a background in Public Relations and wedding planning, Jessica can’t get enough of beautiful events and fine details. As a blessed momma to 3 amazing kiddos, she is always elbow-deep in flour, paint and laundry…or whatever else is on the menu for that day.  She is a total hopeless romantic, married to her high school sweetheart. She can’t live without her faith, her large Italian family, morning espresso, and red wine. She loves to write about DIY projects, yummy recipes, fun crafts for the kiddos, pretty weddings and creative parties at j. sorelle. You can also find Jessica and her sisters on Facebook, Instagram, Pinterest and Twitter.

Mom Tattoos: Super Cool Ways to Get Your Kid’s Name in Ink

I was washing cake out of his hair for the next week, but the photos we got were priceless.
Birthday Cake 3 years ago

My Kids’ Birthday Parties Are Over-the-Top, But This is Why

When my first daughter was eight-weeks-old, I started planning her first birthday in my head. I had a theme and…
Home 4 years ago

And yes, these ideas will be a hit with boys and girls.
Entertaining 4 years ago