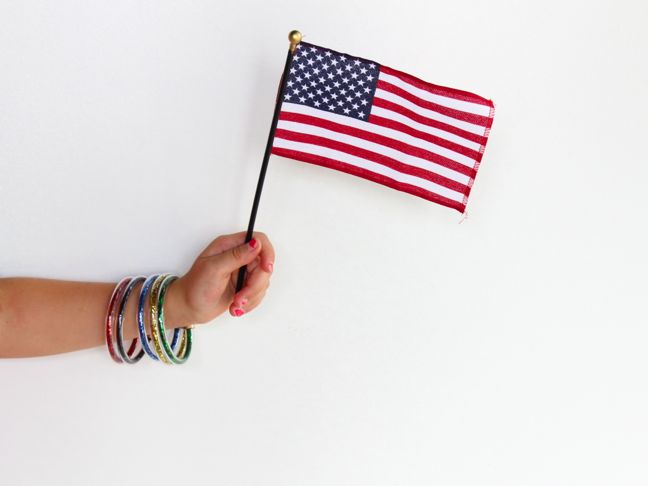 The 2018 Winter Olympics begin February 9th. Our family will be watching the world’s top athletes compete in Rio, while we cheer on our American team.

The Olympics represent so much pride, hope, peace, strength, and determination. It’s a place where hard work and dreams take center stage, so it’s an event for the entire family to watch and celebrate. To celebrate the Olympic spirit in all of us, my daughter and I plan to spend some time doing this Olympics craft. 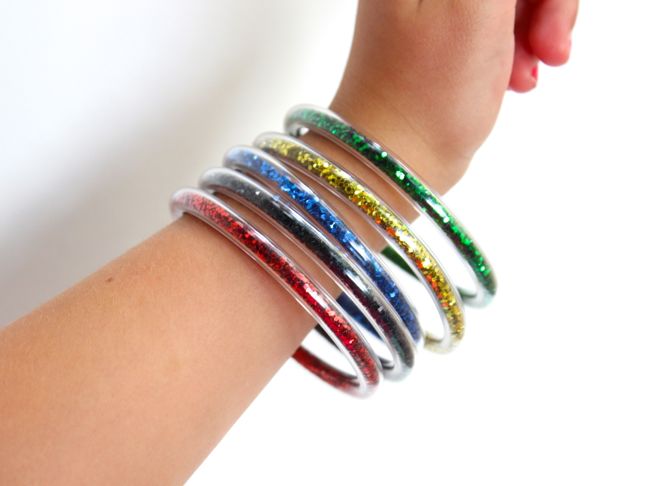 The symbolic five interlaced rings, colored blue, yellow, black, red, and green on a white background, represent the Olympics and the meeting of athletes from countries throughout the world to compete at the Olympic Games. The rings first appeared in 1913 at the top of a letter written by Pierre de Coubertin, the founder of the modern Olympic Games. He explained it with the words, “These five rings represent the five parts of the world now won over to Olympism and ready to accept its fertile rivalries. Moreover, the six colors thus combined reproduce those of all the nations without exception.”

Now the ring colors that originally stood for the flags of the nations who competed in the Olympics can adorn our wrists. We are proud to wear them.

Step 1: Measure the size of the smaller tubing around the wrist. Make sure it can easily be put on and taken off, but it’s not so big it falls off. 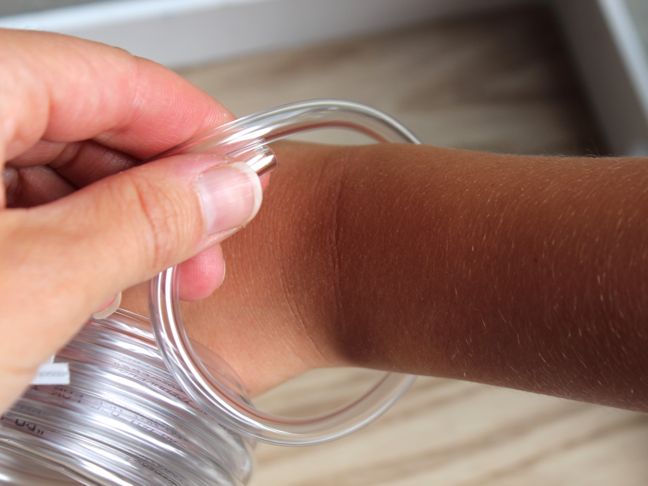 Step 2: Cut the tubing. You will need five for the five rings. 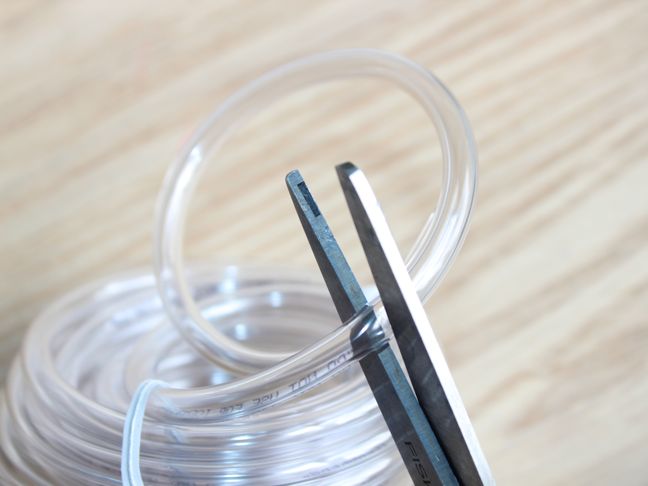 Step 3: Insert the hot glue gun inside one end of the tube and plug it with hot glue. 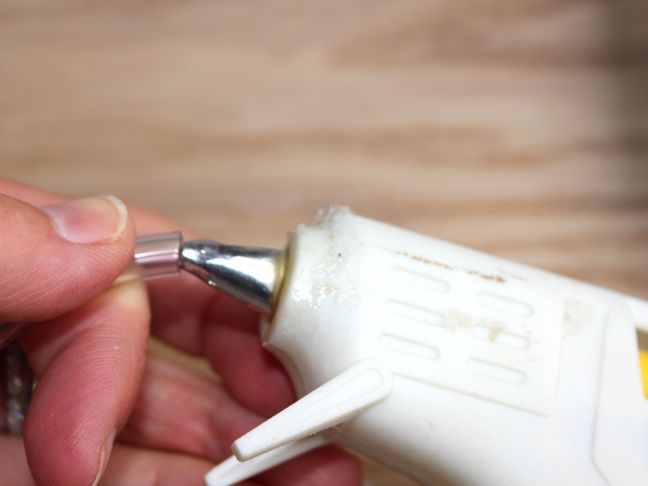 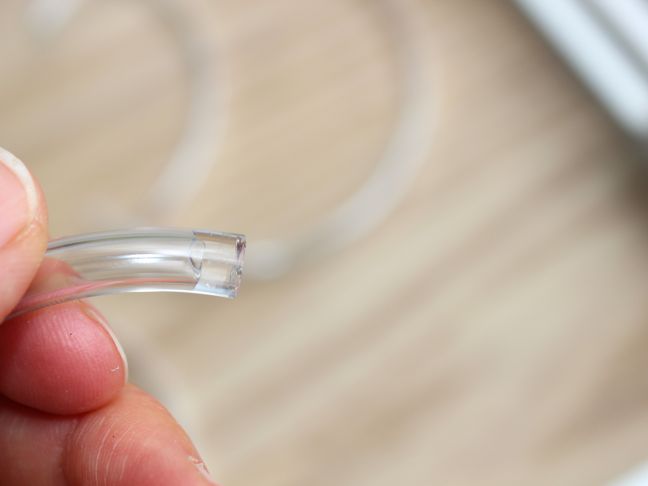 Step 4: If you don’t have a tiny funnel, now’s the time to twist a small piece of cardstock to make a small funnel. Tape the seams so it stays together. Insert the funnel in the other end of the tube, and pour the glitter in. If your glitter continues to get stuck, cut the opening of your funnel larger. 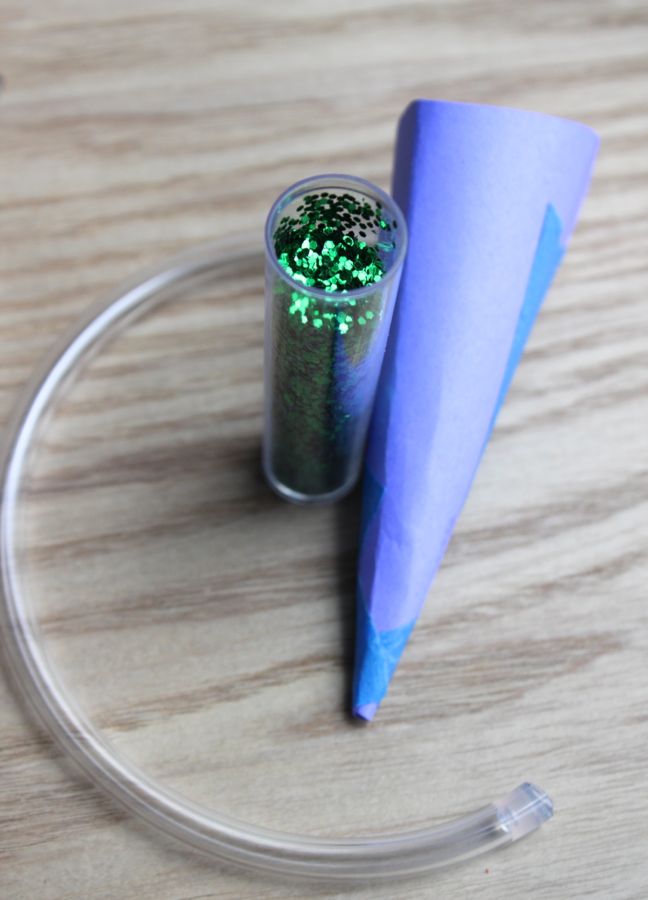 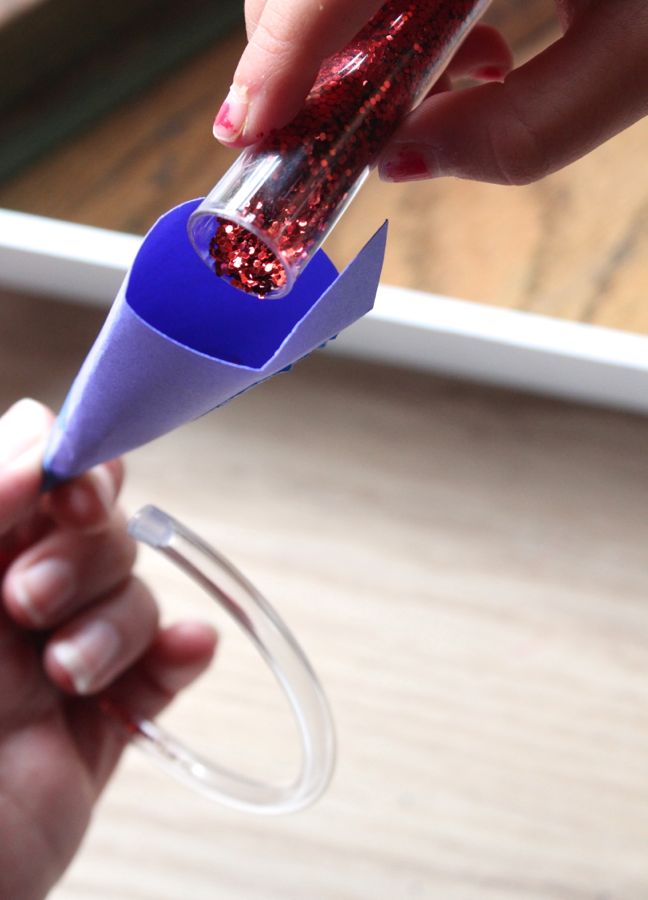 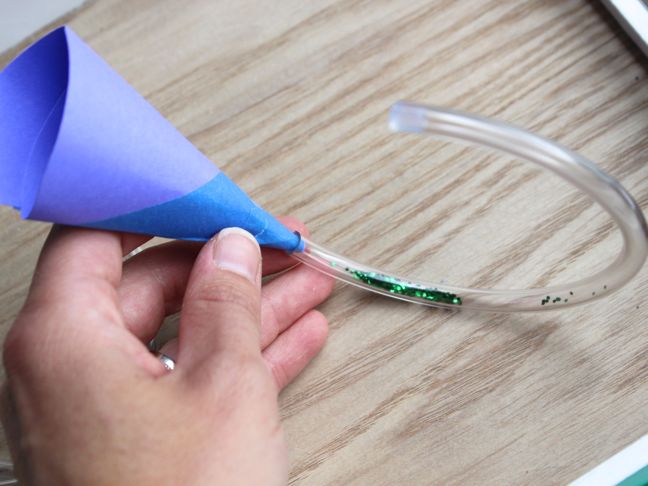 Step 5: Straighten the tube to make sure there is no air between the glitter. Once the tube is completely full with glitter, plug the end of it with a large dab of hot glue. 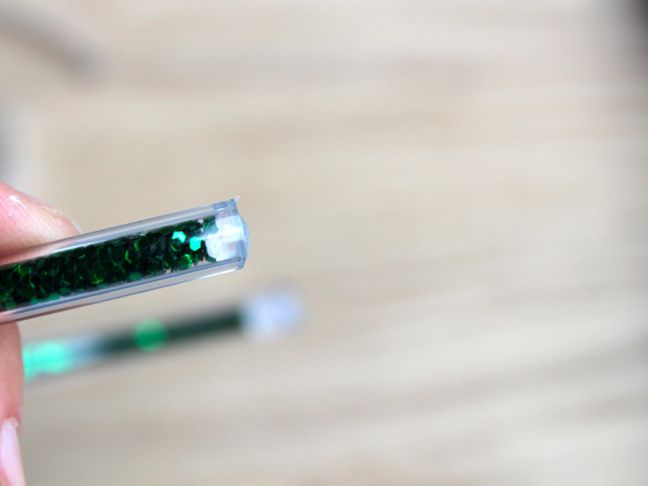 Step 6: Cut the larger tubing into about 1-inch pieces. 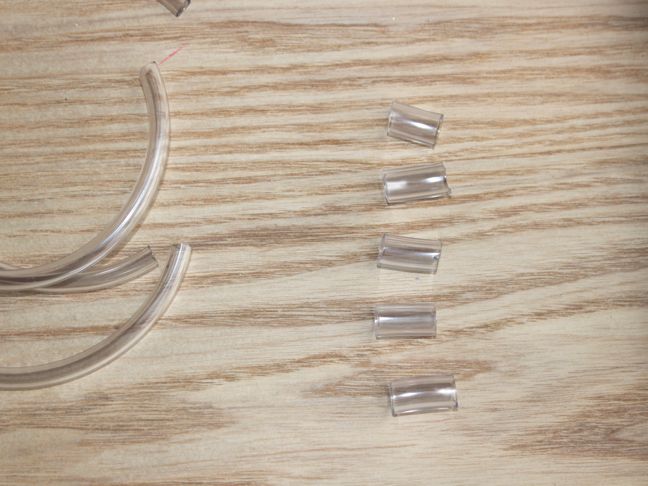 Step 7: Insert one end of the tube with the glitter inside the larger tube, and do the same for the other side. Now, you should have a bracelet. 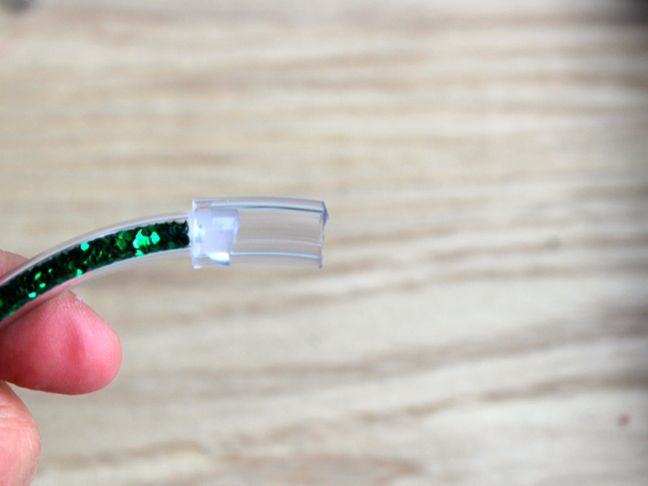 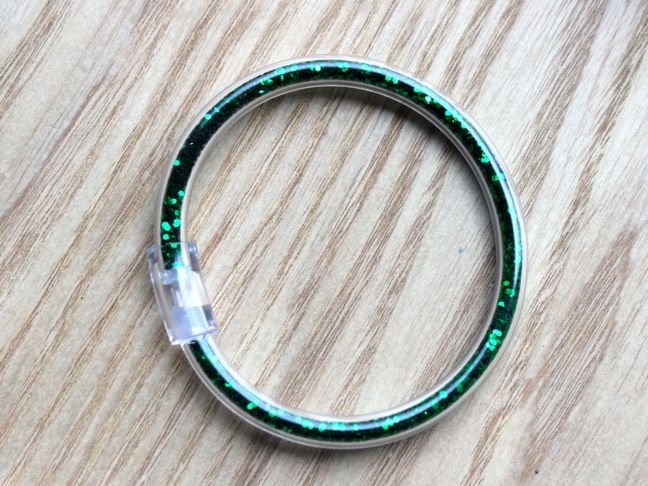 Step 8: You can leave the bracelet as is, or you can paint liquid gold leaf on the piece of tubing that holds the bracelet together. I went with gold because, well, everyone who participates in the Olympics has a dream of winning gold. Let the paint dry. 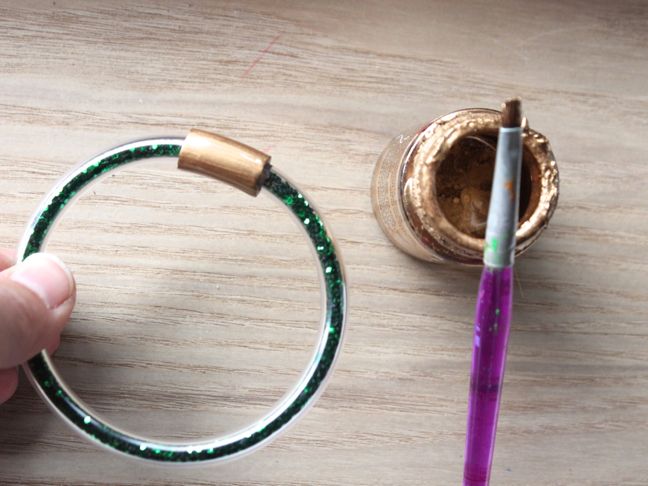 Step 9: Repeat steps one through eight for all other colors. For a complete set of Olympic rings, you need five bracelets; red, black, blue, yellow, and green. 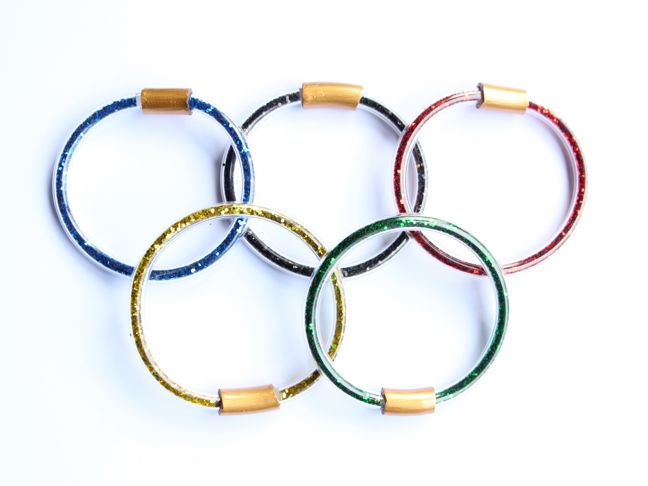 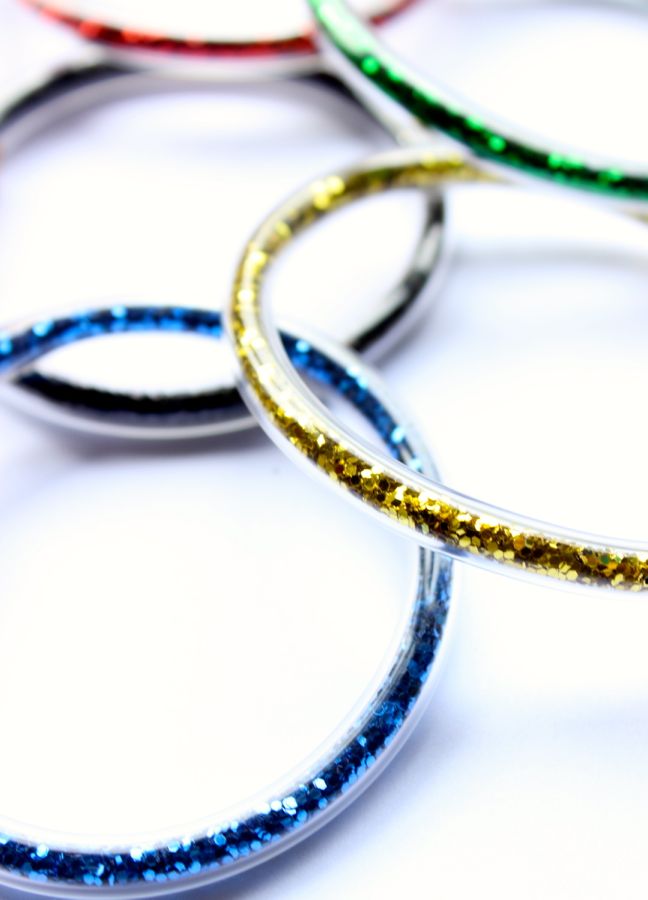 Step 10: Wear the DIY glitter bracelets with pride during the Olympics. Once the Olympics are over, your children will love to pair them with their favorite outfits throughout the year. 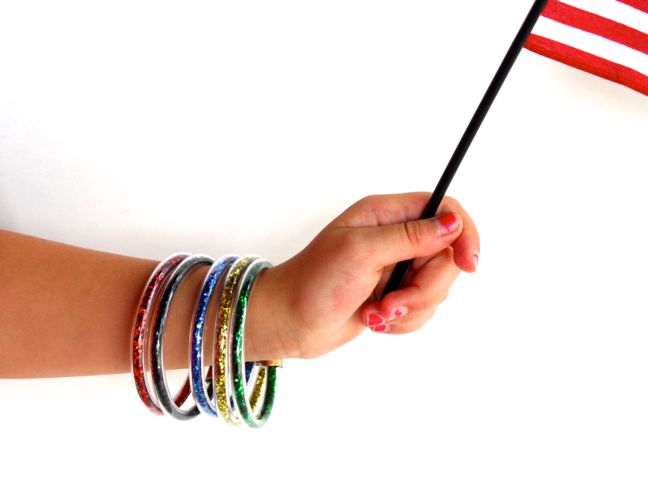 Jessica Gregg is the oldest of the three sisters who founded j. sorelle, a lifestyle + events blog. With a background in Public Relations and wedding planning, Jessica can’t get enough of beautiful events and fine details. As a blessed momma to 3 amazing kiddos, she is always elbow-deep in flour, paint and laundry…or whatever else is on the menu for that day.  She is a total hopeless romantic, married to her high school sweetheart. She can’t live without her faith, her large Italian family, morning espresso, and red wine. She loves to write about DIY projects, yummy recipes, fun crafts for the kiddos, pretty weddings and creative parties at j. sorelle. You can also find Jessica and her sisters on Facebook, Instagram, Pinterest and Twitter.

craft this DIY Jewelry Most Popular Olympics picked for you

If you’re looking for a summer craft that will not only be fun to make, but a statement to wear, I’ve…
Family 2 years ago

This year I supersized one of our favorite dice games and took it outside.
DIY for Moms 2 years ago

Anytime one of my kids complain, I'll reach into this jar for an activity that's fun for them (and hilarious…
DIY for Kids 3 years ago

These DIY Edible Birthday Candles Are a Smash Cake Must