Padma Lakshmi Turns Her Kid’s Cast into a Fashion Statement

When Lakshmi’s 4-year-old daughter broke her elbow, this fashionable mama decided to turn Krishna Thea’s cast into a glamorous accessory, according to People. Krishna’s black cast is now encrusted with crystals. Lakshmi tweeted a photo of it on January 6: 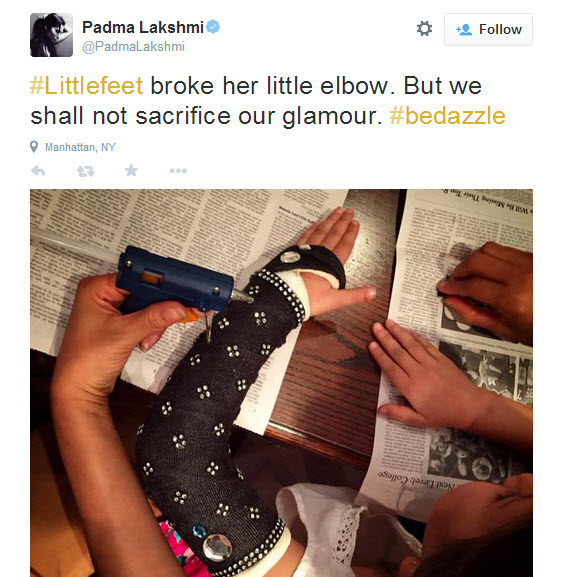 How adorable is that?!

Vicki Clinebell majored in journalism at the University of Colorado and headed to an advertising agency before beginning a long career in broadcasting, spanning production and copywriting to Sales and Management for an ABC affiliate station.

Her decision to switch gears to pursue a career in writing fulfilled a lifelong ambition. She started as a blogger for a diverse group of businesses, and now writes for a number of digital publications for companies stationed in her hometown in the Rocky Mountains, and provides advertising copy and media buys for national and regional clients. She finds the research as intersting as the writing—she loves learning about subjects as diverse as construction scaffolding, child safety seats, and the newest trends in beauty and fashion.

Photo Gallery: Celebrity Parents & Kids Out And About 4/16

Celebrity parents headed out with their kids over the weekend. Among them: Heidi Klum, Padma Lakshmi, and more!
Home 11 years ago

Celebrity parents were on the go with their little ones this weekend.
Home 11 years ago

Several famous families were snapped out and about this weekend.
Home 12 years ago