How To Avoid The Nighttime (And Daytime) Pacifier Game

Starting at around 2-3 months I tried to teach my son, by day, how to put a pacifier in his mouth on his own, it was a lost cause. Maybe out of 200 times he would get it in once. Then, seemingly out of nowhere, around the 5-6 months mark, weeks after I had given up on teaching, I saw he put one in his mouth on his own! Seeing him do it on his own gave me the motivation I needed to help him perfect the skill. I should also preface this that I was really hoping to break the pacifier habit at six months, but that was just never going to happen. His love for the pacifier was too deep and I couldn’t bear – for his sake or my own – to deprive him of it.

So what did I do so that I wouldn’t be left a slave to the pacifier?

By day I tried to avoid putting a pacifier in his mouth as much as possible. I would put it near him and allow him to pick it up and bring it to his mouth or, if that was not possible, I’d put it directly in his hand to allow him to place it himself. It didn’t take long for him to “get it” almost every time. Another important part of the equation was using exclusively Mushie pacifiers (make note to buy the ones for your child’s age range).

From 0-3 Philips AVENT Soothie Snuggle Pacifiers were our go-to, but around that three month mark those pacifiers lasted about a second in my son’s mouth. Yes age ranges matter when it comes to pacifiers! It’s important to be sure that you have the right size and shape of pacifier for your baby.

When I transitioned away from AVENT I tried a few pacifiers (I love the Babylist Pacifier Box – Babylist, if you’re reading, can you please launch one for three and six+!) and found that the most important was to transition to a pacifier that has no “up or down” and is easy and intuitive for baby to grasp. Mushie’s not only fit the bill in that respect, but they are beautifully designed. In fact, they’ve amassed a cult following for their unique Scandinavian aesthetic. Plus they last longer. They have ones designed for 0-6 and others for 6-18. 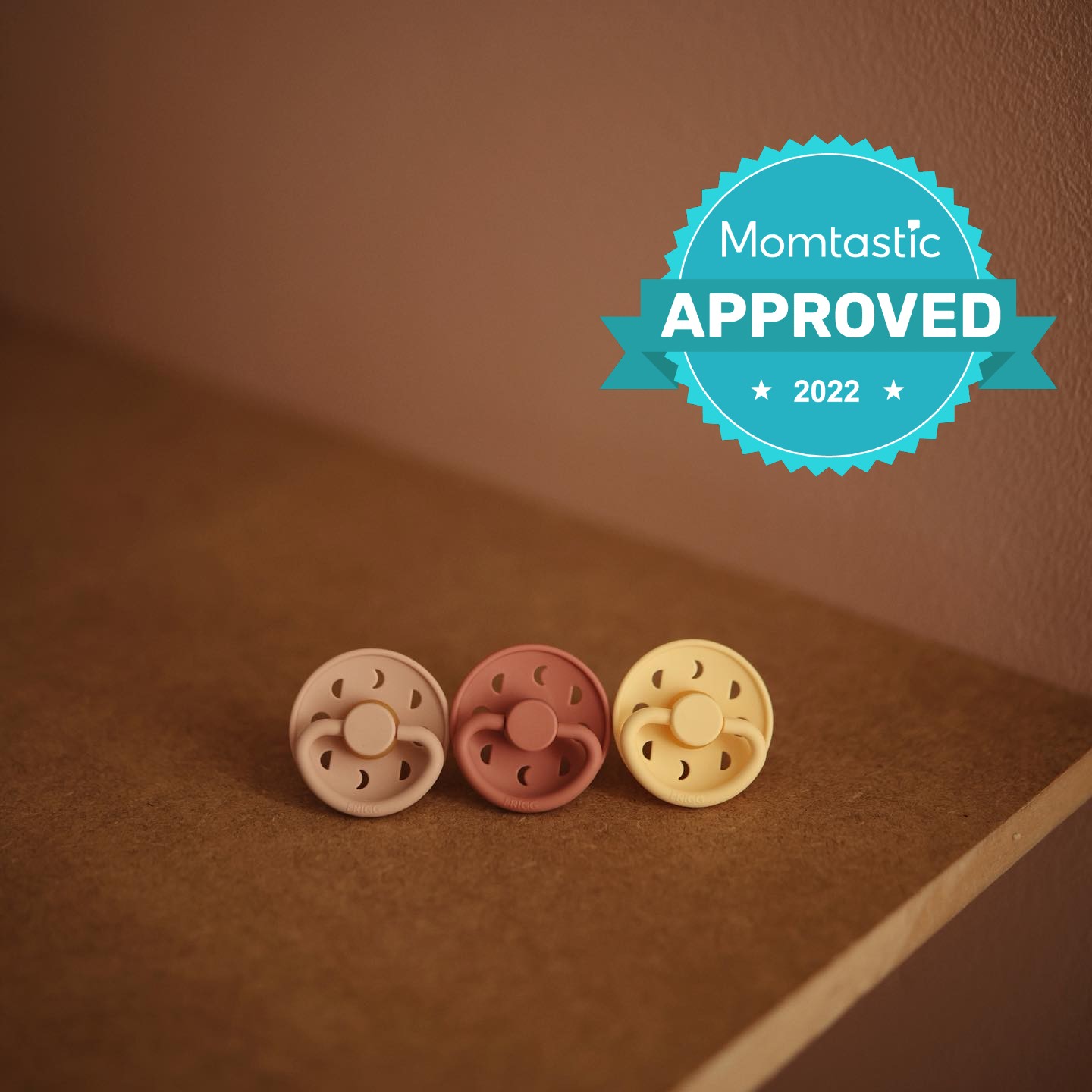 So what about nights?

For those first few months, baby would fall asleep and I’d go in and gently remove the pacifier, so that he would not wake up because a pacifier fell out. If he woke during the night I would replace the pacifier and do the same removing process. This started the “pacifier game” where every time baby woke up, he would scream for his pacifier. This lasted up until that 5-6 mark when I started teaching baby how to replace the pacifier himself during the day. But how do you do that at night when it’s pitch black?

This where Mushie comes in again.

First off, they have glow-in-dark “Night” pacifiers, which are critical since babies sleep best in the pitch black. Next, Mushie’s design make them easy to grab with no sharp edges. So, all I did was sprinkle about a dozen of the pacifiers all around baby’s crib, so that when baby awoke at night – no matter where he was in the crib – he would be able to find a pacifier and play around with it long enough to fit it in his mouth. And it worked! I put baby to bed with a pacifier, but I didn’t replace it at night – meaning when he did wake up, I rarely actually had to go into his room. He would fuss/cry for 1-2 minutes, find a pacifier and that was it.

Sharon Feiereisen is a freelance lifestyle writer and the managing editor at Momtastic. Her work has been published in Time Out, Newsday, The Knot, Teen Vogue, Business Insider, Real Simple and Hamptons Magazine among many other print and online outlets.

How Kelsey Searles, Founder Of MiliMili, Does It All

Even those of us who spend most of our days in neutrals often love dressing our kids in fun, bright…
Home 5 months ago

You might know Souper Cubes from Shark Tank where the product wow’d with its ability to facilitate make-ahead freezer meals. If you…
Parenting 5 months ago

I’m in the minority of people to say I don’t like the look of the Stokke Tripp Trapp High Chair. People looooove…
Babies 6 months ago

This Pillow Will Save You If You’re Suffering From Acid Reflux (Pregnant Ladies, We See You!)